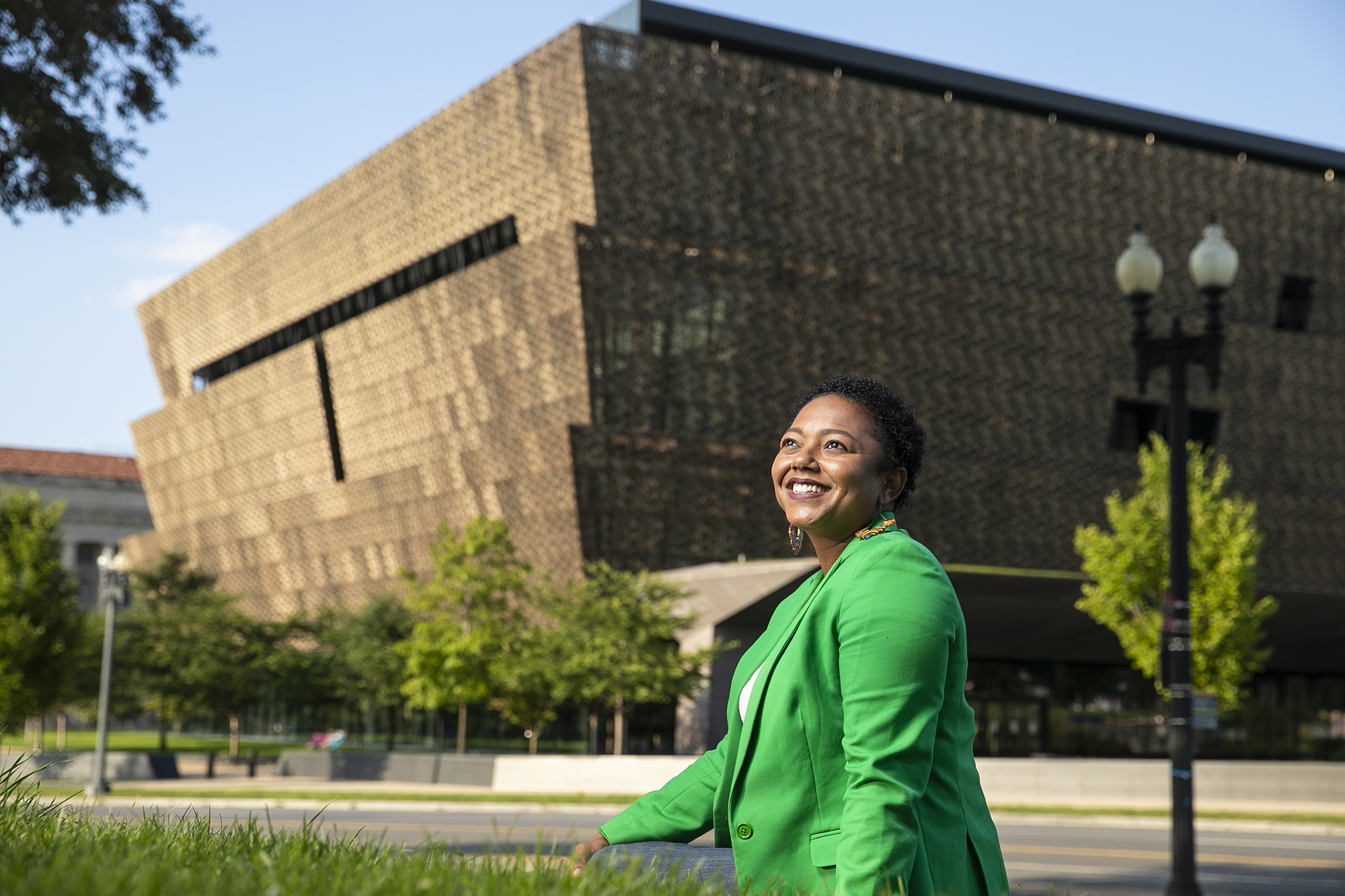 When Carla Thomas McGinnis, MA Arts Management ’13, visited her doctor’s office for a routine appointment, she wasn’t expecting to get more than a clean bill of health—instead, she left with a lead on a potential job, when her doctor suggested she look into the Charles H. Wright Museum of African American History in Detroit, Michigan. That tip led to her first job out of college, as the museum’s living history project coordinator.

“Working at a museum was not on my radar at all,” she says. But the job proved to be a perfect fusion that pulled from McGinnis’s undergraduate studies in African American history and her personal love of theater. At the museum, McGinnis created productions in which actors brought to life a moment in history for attendees. “When [living history] is done right…it excites people. It brings another level of engagement to it and fun…just an emotional connection that you can start seeing how history affects people personally with their families.”

After seeing firsthand the 2008 economic recession’s impact on the museum’s funding, McGinnis began to contemplate returning to school—and she ended up finding Mason. The Arts Management Program caught her eye because of its focus on the artist as well as business management. “They were a program that [emphasized] how to do arts management without sacrificing the artist—letting the artist and the art lead and the administrator being the support for that. And that was speaking my language.”

While in the program, McGinnis volunteered at the Smithsonian Institution’s National Museum of African American History and Culture (NMAAHC) a few times a week, where yet another moment of serendipity led to a job after graduation. “I reconnected with an old classmate who worked there who recommended I apply,” McGinnis says, crediting fellow alumna Natalie Holmes, MA Arts Management ’12, for helping her find her first position at the museum as a program specialist. McGinnis now works as the assistant director of council operations and museum initiatives.

McGinnis has been there for some special moments in the NMAAHC’s young history, including the dedication ceremonies in 2016 attended by Barack and Michelle Obama, George W. and Laura Bush, Oprah Winfrey, and—McGinnis’s personal favorite—Ruth Odom Bonner, whose father was enslaved. Four generations of Bonner’s family, along with the Obamas, joined Ruth in ringing the bell to officially mark the museum’s opening.

And with the nation’s current reckoning with racism, McGinnis stresses the museum’s importance even in the middle of a pandemic. “The museum has always been looked at as a leader in how we can talk about race and social justice,” she says. “[Museums] can be the center of a community, and that’s what I’m seeing our museum being right now. It’s a congregating site for people who are protesting…people [are] in front of the museum kneeling and taking a stand in many ways…It’s been really gratifying to see how the museum is still playing this role when we can’t be inside.”

McGinnis is well aware of her career field’s lack of representation for people of color. “I discovered how hard it is for people of color to get leadership roles in fundraising at organizations. There is a stigma or belief that ‘Oh, they don’t know the people with the deep pockets,’ or ‘They don’t have the right accent; they don’t present in a certain way…’ I’ve just become more aware of the landscape of fundraising and what African American fundraisers face.”

“What I’m left with right now is just an appreciation for…what doors I could open through my affiliation with [Mason’s] program. I’m grateful because…it helped me get experience that has allowed me to have this kind of career, and I don’t take that for granted.”

This story originally ran in the fall 2020 Mason Spirit.